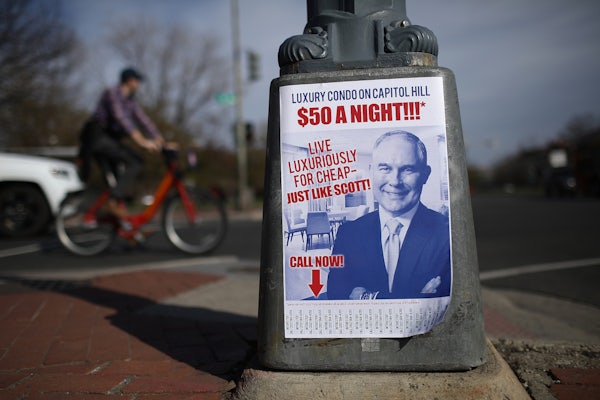 Another bomb just dropped on Scott Pruitt—from a Trump ally.

A former top political aide to the Environmental Protection Administrator who describes himself as a Republican and loyalist to President Donald Trump is coming out swinging against his former boss. His newly public allegations of excessive spending, retaliation, and overall shady behavior at EPA could represent the most significant threat to Pruitt’s job yet.

The New York Times had previously reported that Kevin Chmielewski, Pruitt’s former deputy chief of staff for operations, was placed on unpaid administrative leave after refusing to approve Pruitt’s requests expensive office furniture and first-class flights. Chmielewski has now confirmed this story in a wide-ranging conversation with congressional Democrats, the contents of which were published in letters Democrats sent to Pruitt and Trump on Thursday. Chmielewski also provided a wealth of new details about Pruitt’s myriad scandals—including one tense situation that culminated in Chmielewski filing a police report against the head of Pruitt’s security team.

Those details are contained within the letters published below, but a few notable ones: Chmielewski, who was among the first employees of Trump’s presidential campaign before he joined Pruitt’s office, said that he believes Pruitt retaliated against him for raising concerns about excessive spending on security, office decor, and first-class flights. (The decor, apparently, included art leased from the Smithsonian.) He said he overheard Pruitt speaking with Stephen J. Hart, the energy lobbyist who rented part of his condo to Pruitt for $50 per night, about concerns that Pruitt wasn’t paying his rent. Chmielewski said he had evidence that Pruitt knew about the huge raises given to his top aides in defiance of White House orders, despite Pruitt repeatedly claiming he had no idea about them. He also said he cooperated with the inquiry from Democrats because “regardless of political party, ‘right is right, and wrong is wrong,’” according to the letters.

The significance of these claims stems from Chmielewski’s close relationship to Trump, who is the only reason Pruitt still has a job. During a campaign rally in April 2016, Trump personally called Chmielewski to the stage to praise him. “Where the hell is Kevin?” Trump said. “He’s a star.” He’s also not the only Republican raising concerns. Trey Gowdy, the chairman of the House Oversight Committee, said on Wednesday that Pruitt has not been adequately cooperating with his investigation of Pruitt’s scandals.