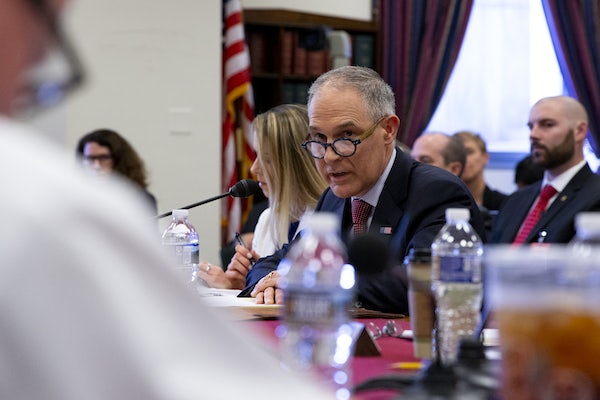 The two aides to the embattled Environmental Protection Agency chief left their posts this week, following two congressional hearings last week where Pruitt was questioned over his ethics scandals and deregulatory agenda. Pruitt is also facing “new reviews” from the EPA’s inspector general over his $50-per-night condo rental from an energy lobbyist, which could constitute a violation of the federal bribery statute.

Pasquale Perrotta, Pruitt’s head of security, resigned on Monday, according to ABC News. Perrotta reportedly encouraged Pruitt’s lavish spending on first-class flights, fancy hotels, and 24-hour security detail—and clashed with EPA employees who disagreed with it, sometimes physically. Perrotta told ABC he plans to “fully cooperate and answer any and all questions” from Congress about his role in spending decisions at EPA, starting with a Wednesday interview with the House Oversight Committee.

Albert Kelly, one of Pruitt’s top aides on cleaning up toxic Superfund sites, has also resigned, according to a Tuesday report from Axios. Kelly—a former banking executive and close friend of Pruitt’s from—decided to resign after The New York Times reported that “he was barred from working in the finance industry because of a banking violation,” Axios reported, citing “two sources with knowledge” of the decision.

The resignations come on the heels of new investigations into Pruitt’s behavior from EPA Inspector General Arthur Elkins. On Friday, the day after the House hearings, two Congressional Democrats released a letter confirming for the first time that Elkins was looking into Pruitt’s potentially corrupt condo deal. There are now at least nine open federal investigations into Pruitt’s activities at the EPA. Still, many congressional Republicans are defending Pruitt, and President Donald Trump hasn’t yet indicated that he intends to fire him.