The Case Against Packing the Court

A costly fight over the number of Supreme Court justices could put a stop to any real hope for reform under Joe Biden. 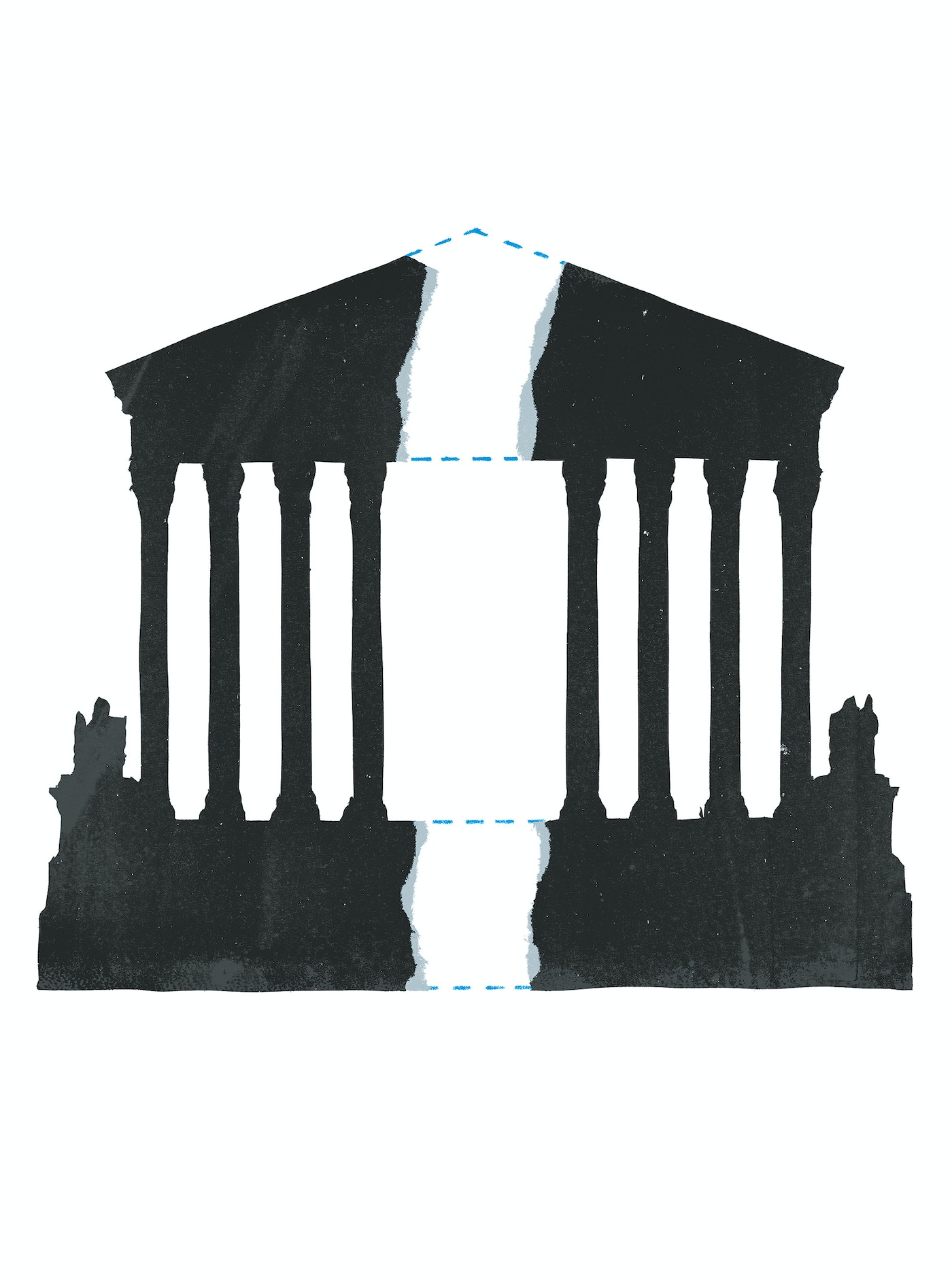 One Saturday evening in late December 1936, Homer Cummings, the attorney general, arrived at the White House bearing memos and briefing books and, over the next hour, proceeded to convince Franklin Roosevelt to pack the Supreme Court. The idea had been in the air throughout FDR’s first term, which was just ending; it had obvious appeal at a time when the court’s conservative majority had knocked down much of the New Deal, overturning acts of Congress at 10 times its previous rate. At a Cabinet meeting in late 1935, Roosevelt himself had dismissed court-packing as “a distasteful idea,” but a year later, he was ready to part with his hesitations. He agreed with a comment Cummings made: “We were probably unduly terrified by a phrase.”

There are few, if any, such fears today. FDR’s failed attempt to expand the court in 1937 stood for eight decades as an object lesson in presidential overreach, but no longer. Even before the death of Justice Ruth Bader Ginsburg opened the prospect of a third Trump appointment to the court, left-leaning activists and lawyers had begun urging an increase in the number of justices. It began as a call for redress, of sorts, after Mitch McConnell, the Senate majority leader, shut down the confirmation process for nearly a year to deny President Barack Obama’s nominee, Merrick Garland, a place on the court in 2016. Four years later, “pack the court” has become a cri de coeur, an expression of mounting, and wholly justified, anger—not only at McConnell’s blockade, but also at his muscling Brett Kavanaugh into the next vacant seat, in 2018, despite credible charges of sexual assault; and now, his refusal to let the news of Ginsburg’s passing settle for even two hours before declaring that President Donald Trump should have his way with the seat she leaves vacant. It was as if, the day of John Lewis’s death, McConnell had launched a campaign to expunge what remains of the Voting Rights Act of 1965.

By this point, even Bill Kristol—a Never Trumper, true, but hardly a liberal—suggests that if Senate Republicans fill the seat before the election, there will be “no plausible argument against Democratic court-packing.” It is clear that if Joe Biden and Senate Democrats take power, they will face intense pressure not just to pack the court, but to do so, as Ian Millhiser of Vox insists, as “their first action.”

Yet there remains a plausible argument against it, perhaps even a powerful one.

The old, well-rehearsed case against court expansion goes something like this: Packing the court would plunge it into politics; it would trigger an endless cycle of retribution, as each successive president packs the court to reset its ideological balance; it forces an issue that is best addressed by “Father Time, with his scythe,” as one senator advised Roosevelt. None of those arguments is persuasive today. The idea that Democrats should respect one of the few norms—the number nine, set by an act of Congress in 1869—that the Republican Party has not shattered seems quaint, at best; and the notion that Democrats should sit quietly and wait for a conservative justice to vacate his seat is asking too much. If Justices Kavanaugh and Neil Gorsuch live as long as Ginsburg did, they will still be writing opinions in the 2050s. Amy Coney Barrett, Trump’s nominee, is even younger.

The right’s hostile takeover of the court has led even moderates—who tend to be die-hard institutionalists—to embrace the possibility of court-packing. “Nothing is off the table for next year,” Chuck Schumer told Senate Democrats the day after Justice Ginsburg’s death. But as Schumer no doubt understands, the table is already buckling beneath the weight of all the urgent business that Congress would need to address in the first year, perhaps the first months, of a Biden presidency: a coherent national response to the pandemic and a plan for the distribution of a vaccine; a broad-based economic stimulus package; an expansion of unemployment relief and a renewal of aid for ailing businesses and industries; meaningful steps to address systemic racism; legislation, as Biden has proposed, to promote clean energy and combat climate change.

This, of course, is a partial list, and every item on it will be competing for primacy. The attention of a Biden White House would be stretched across a wide range of immediate concerns—wider, arguably, than any incoming administration has faced since FDR’s. The first 100 days of Roosevelt’s first term saw action on virtually every front: banking, agriculture, wages, public works, unemployment relief, mortgage assistance, monetary policy. Some Democrats, predicting a collision with the court’s conservative majority, had urged Roosevelt to pack the court preemptively, but he brushed that suggestion aside; there was too much else to do.

When Roosevelt finally struck against the court, at the start of his second term, his party held 76 of 96 seats in the Senate; he saw no reason why he could not persuade Congress to expand the court and, at the same time, renew his assault on the economic crisis. Yet his court plan cost him his mandate. It consumed Congress for nearly six months, dividing his supporters and driving some into the arms of the GOP. In May 1937—nearly four months into this war of attrition—Roosevelt proposed one of the most sweeping pieces of legislation of his presidency: a bill to ban child labor in factories and to create a labor standards board that would regulate wages and hours. He did this, in part, to change the subject. The gambit failed. The bill did nothing to draw recalcitrant Southern Democrats back into the fold. “To ask them simultaneously to support a national wages-and-hours law” and the court bill, this magazine observed, “is probably to ask more than human flesh is capable of.”

The New Deal never regained its momentum. While the court plan did not create the divisions in the Democratic Party, it wrenched them wide open; it left the party raw and at war with itself. The marriage of convenience between the Senate’s Republicans and its Southern Democrats, forged during the court fight, became an enduring alliance—causing FDR no end of trouble for the remainder of his presidency. His attempt to pack the court had sent his popularity—with the public and within his party—into its steepest decline since he took office. By 1939, before the war in Europe shifted America’s focus overseas, Roo­sevelt’s second term was seen as a series of lost opportunities.

History, therefore, as well as political logic and math, counsel Biden against moving rashly. Even the more bullish blue-wave projections would give him nothing approaching FDR’s 60-vote margin in the Senate. At best, Biden might have three or four votes to spare. To advance his agenda—really, to do much of anything at all—he needs to avoid alienating Democratic senators like Joe Manchin of West Virginia with a costly fight over the court. He will also need the votes of senators who have just recaptured Republican seats (most likely in Arizona, Colorado, and Maine), as well as those who will face reelection in 2022 in states that are less-than-reliably blue: New Hampshire, for example, and Nevada.

Of course, Biden’s calculus could change over time. The party’s left wing—as Senator Ed Markey has made clear—is determined to rebalance the court. And if oral arguments begin to look, increasingly, like meetings of a student chapter of the Federalist Society (“Government Overreach in the Wake of COVID-19” was the title of one such session in September at Baylor University), the court will find itself at odds not only with a Biden administration but with “the plainest facts of our national life,” as Chief Justice Charles Evans Hughes put it in 1937. Every time a bad decision comes down—a decision restricting abortion rights, for example, or discounting the effects of racial discrimination, or blessing the purchase of political influence by business interests, or constraining the government’s ability to address the climate crisis—the calls to pack the court will grow more insistent. We are no longer terrified of the phrase, but perhaps the justices in the majority should be.

Jeff Shesol is the author of Supreme Power: Franklin Roosevelt vs. the Supreme Court. His book on John Glenn, the space race, and the Cold War will be published next year.