How three combative, unconventional economists forced the president to abandon his neoliberal ways 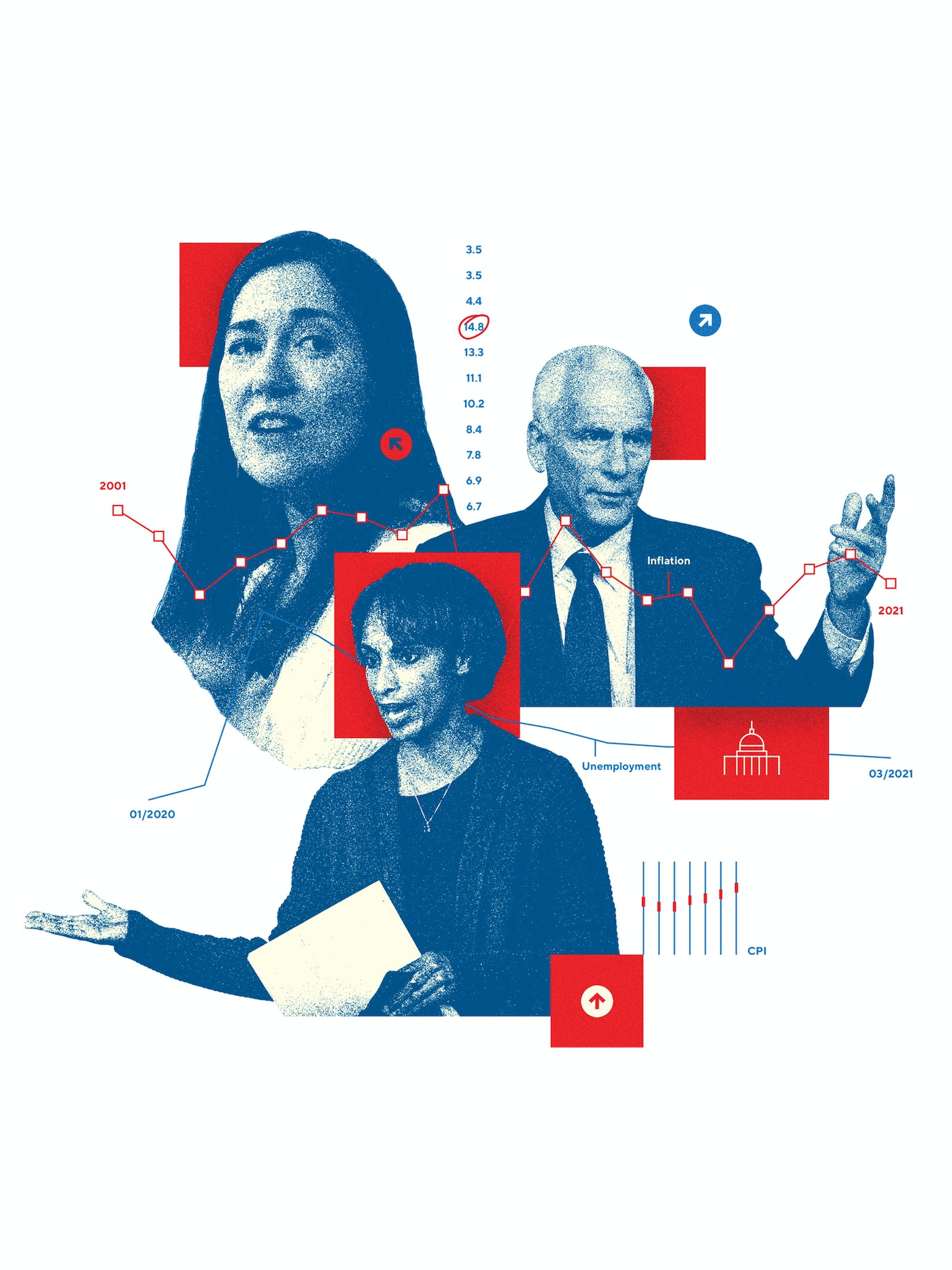 For a generation, when Lawrence Summers talked, politicians listened. As a powerful and trusted adviser to the last two Democratic presidents, the Harvard professor held sway throughout the Treasury Department and White House. But this March, he started singing a very different tune. In an interview with Bloomberg, he sputtered that President Joe Biden had crafted “the least responsible macroeconomic policies we’ve had in the last 40 years.”

His criticisms have drawn a fervent response from Jared Bernstein, a Democratic administration official who sits on the Council of Economic Advisers. Summers is “just wrong,” Bernstein said from the White House briefing podium. “He is wrong in a pretty profound way,” he told CNN. “We have to go big and we have to go bold.”

Their exchange was notable not just because it rocked the normally staid “dismal science” as two prominent economists duked it out on the airwaves, but also because it called attention to the rise of a new brand of economics that eschews deeply entrenched dogmas. Democratic policymaking used to be hemmed in by fear—fear of government overreach and regulation, of deficits, and being seen as too profligate. Summers had long whispered those neoliberal fears into the ears of powerful politicians and economic thinkers. Now, he finds himself ranting on the outside.

Biden has stacked his Council of Economic Advisers with three labor economists whose focus is on workers, not just markets: Bernstein, who was most recently senior fellow at the left-leaning Center on Budget and Policy Priorities; Heather Boushey, a founder of the Washington Center for Equitable Growth, which focuses on inequality; and Cecilia Rouse, who left her post as a dean at Princeton to serve in the administration. This is the team pushing Biden not to kowtow to fearmongering about deficits and inflation. The real worry, they believe, is that Biden’s economic agenda won’t do enough to help ordinary people struggling to recover from the pandemic.

These three economists make for an unconventional trio. Bernstein has moved between the lefty think tank world and the federal government, serving as deputy chief economist at the Department of Labor between 1995 and 1996 and as chief economic adviser to Biden between 2009 and 2011. But a Harvard economist he is most certainly not. He studied at the Manhattan School of Music, majoring in double bass, and later received his Ph.D. in social welfare from Columbia. (He recently showed off his musical skills in a YouTube video of himself playing the bass, with a title punning on wonky inflation data. Don’t feel bad if you missed it; Bernstein’s YouTube channel has five subscribers.)

Like Bernstein, Boushey had an unconventional education. She got her undergraduate degree at Hampshire College, an experimental liberal arts school founded in 1970 that doesn’t give numeric grades, and received her Ph.D. in economics from the New School, a place where “neo-Marxists and institutionalists created centers of scholarly dissent,” in the words of The American Prospect’s Harold Meyerson.

Her interest in economic inequality and America’s thinning social safety net started early. Her father, who worked at a Boeing plant, was laid off just as Boushey was entering her teenage years. “That was the moment that I realized that actually economics—whether or not my parents have a job—affects whether or not I get to do the things that matter to me in my life,” she told The New York Times. She was the architect of Senator Kirsten Gillibrand and Representative Rosa DeLauro’s paid family leave proposal. Now, she’s working in the executive branch for the first time.

Rouse is the most traditional pick in Biden’s labor triumvirate. A Harvard graduate who had Summers as an adviser, she served on the National Economic Council between 1998 and 1999 and on the CEA for the first two years of the Obama administration. And yet she, too, brings a different background than most liberal economists who have advised presidents. Her father, one of the first Black people to get a Ph.D. in physics, was constantly steered away from prestigious academic postings; when her family moved to California, only one real estate agent would work with them. She started studying economics during the mass unemployment of the 1980s. “It was impossible to separate what we were learning in the classroom from what I knew was going on in towns across the country,” she said in December. That experience informed what she went on to study at Harvard: labor and education. As the first Black person to lead the CEA, she told me, “I’m willing to put an emphasis in different places.”

Rouse joined the CEA shortly after President Barack Obama entered office, and watched as he wrestled with how much money to pump into an economy still in the throes of the Great Recession. Christina Romer, the economist who was then the chair of the CEA, recommended that Obama put forward a stimulus package of more than $1 trillion. But Summers, worried that the figure would add too much to the deficit, simply left her estimate out of his memo of recommendations to the president. “There was no serious discussion to going above a trillion dollars,” one insider told journalist Ryan Lizza. Obama ended up signing a $787 billion package, and the recovery dragged on slowly and painfully for another decade.

That agonizing period tested some of the most cherished theories in economics—such as the idea that a higher minimum wage will automatically lead to a reduction in jobs, or that cutting taxes will boost economic growth, or that the government shouldn’t borrow money to finance important investments. And a group of newly emboldened economists who were focused on the failures of the free market, such as David Card, Raj Chetty, and Emmanuel Saez, found many of those theories to be bunk. The recovery from the Great Recession led to the “acknowledgment that our canonical models may have failed,” Rouse told me. “You layer on top of that decades of rising income inequality, and I think it had many people saying: Hmm, how can we build a better mousetrap? How can we flesh out and have a more complete understanding of our economy?”

Freed of the old economic models, Bern­stein and the others were able to convince Biden to finance his pandemic relief package through borrowing, instead of “paying” for it with higher taxes or lower spending.

Behind closed doors, the team is worried about inflation. “A nontrivial part of my job is worrying about pretty much everything in the economy,” Bernstein said with a laugh. But he believes that some “economic heat” is good for the economy, and he sees bigger risks than inflation: “The risks of lots of people losing their homes. The risks of people not having a robust job market to go back into. The risks of people failing to have the nutritional support that they need. The risks of the vaccine not being produced and distributed quickly and efficiently enough.” The real danger is not inflation, but a failure to meet the moment with the force it demands.

Biden is an odd standard-bearer for this new economic approach. He has a long history of siding with credit card and other financial companies over stricter regulation. His epitaph for the “Third Way” centrism of the Clinton era was simply, “it worked.” Now, he sounds more like Bernstein and Boushey. “The risk isn’t that we do too much when it comes to a Covid relief package—it’s that we don’t do enough,” he tweeted in February.

Of course, Biden could eventually be hemmed in by runaway inflation or his old neoliberal impulses. But for now, he’s championing a new approach to economics focused on boosting incomes and ignoring fiscal hawks. That, more than anything, is the clearest sign yet that the times have changed.

Bryce Covert is a contributor to The Nation and The New York Times. She covers the economy.