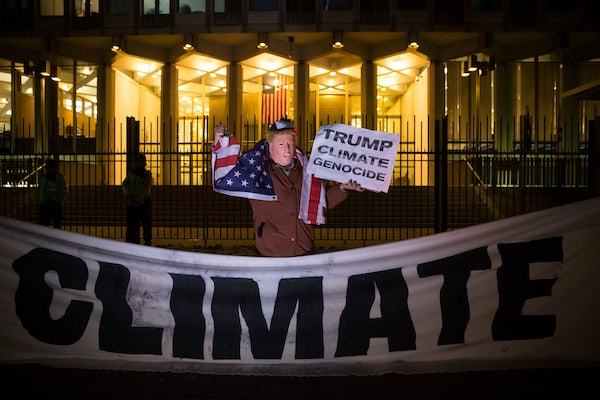 Voters hate almost everything Donald Trump is doing on climate.

Since taking office, the president has proposed massive cuts to federally funded climate research, issued an executive order to repeal Obama-era climate regulations, and vowed to revitalize the coal industry. Turns out, the vast majority of voters don’t like any of those decisions, according to a Quinnipiac poll released Wednesday.

Sixty-two percent of all voters disapprove of Trump’s rollback of federal regulations intended to fight global warming. Seventy-two percent say it’s a “bad idea” to slash funding for scientific research on climate change and environmental issues. And 56 percent say coal use in America should be discouraged because of its negative environmental impacts.

Among Republicans, 54 percent believe climate regulations should be squashed, and only 19 percent want to discourage the use of coal. But they’re almost evenly divided when it comes to Trump’s war on government-funded environmental research. Fifty percent of GOP voters agree with slashing it, and 45 percent don’t.

Americans as a whole still largely trust scientists, who, according to a separate poll from Pew Research released Thursday, remain the most widely trusted profession aside from military officials. On the issue of climate change, even many of Trump’s own supporters trust scientists over him: The Quinnipiac poll found that only 19 percent of voters agree that climate science is a “hoax.”