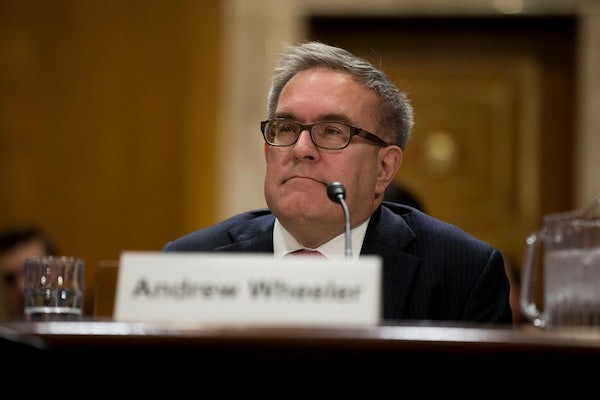 The new EPA chief has his first controversy.

Ever since Scott Pruitt announced his resignation as head of the Environmental Protection Agency on Thursday—in fact, ever since he became embroiled in scandal—the press has scrutinized the agency’s number-two official, former coal lobbyist Andrew Wheeler. Would Wheeler, as the acting administrator, be any different than Pruitt when it comes to running the EPA?

A Politico report on Friday hints at an answer. Pruitt’s “top advisers” have been suppressing a scientific report warning that “most Americans inhale enough formaldehyde vapor in the course of daily life to put them at risk of developing leukemia and other ailments.” The story does not directly implicate Wheeler in the study’s suppression, but notes that he “has a history” with the chemical. “He was staff director for the Senate Environment and Public Works Committee in 2004, when his boss, then-Chairman Jim Inhofe (R-Okla.), sought to delay an earlier iteration of the formaldehyde assessment.”

Under Pruitt’s reign, the EPA was known for trying to prevent the release of scientific studies on the harmful effects of pollutants. Earlier this year, Pruitt’s aides tried to block publication of a study showing contaminated groundwater across the country was more toxic than the government realized. Pruitt also instituted an EPA-wide policy in April that effectively prevents the agency from using research showing that pollution is bad for your health.

Pruitt may be gone, but the aides who attempted to suppress these studies remain. Those aides include Wheeler, who was confirmed as deputy administrator in mid-April and will be acting administrator for months (and could become the new chief, if Trump nominates him). It’s already been reported that Wheeler has many of the same policy deregulatory priorities as Pruitt. It remains to be seen whether he’ll continue his former boss’ policy of keeping inconvenient scientific evidence in the dark.