As Democrats withdraw support, we may see a future in which charters turn rightward—while still getting federal funding. 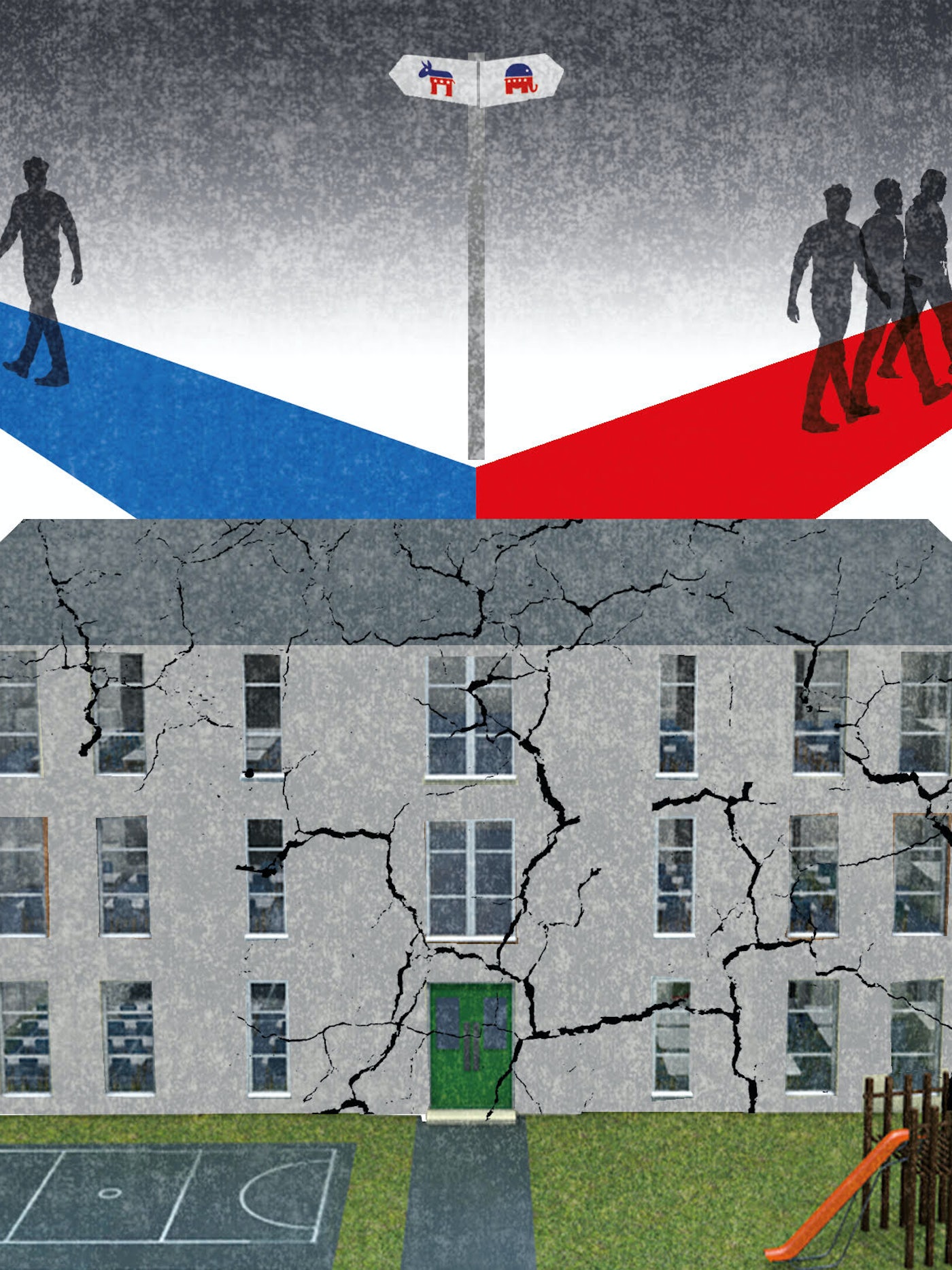 In 2019, when West Virginia passed legislation that allowed for the creation of charter schools, it represented yet another feather in the cap of the school-choice movement. Nearly three decades after the creation of the very first publicly funded, privately managed school, in Minnesota, charters now educate more than 3.3 million K-12 students in 7,500 schools across the country, and West Virginia—where lawmakers ignored the fierce opposition of the state’s teachers’ union—became the forty-fifth state to allow them.

Yet today the charter school movement itself is perhaps more vulnerable than it has ever been. Unlikely allies in the best of times, its coalition of supporters—which has included progressives, free-market Republicans, and civil rights advocates, and which has been handsomely funded by deep-pocketed donors and Silicon Valley moguls—is unraveling.

Much of the blame rests on the hyperpolarized politics of the Trump era. Under Betsy DeVos, the lightning-rod secretary of education, Republicans rediscovered their love for private school vouchers and religious education. And with the taste for all things neoliberal on the wane within today’s Democratic Party, charter schools, long the favored policy plaything of the liberal donor class, are simply a harder sell.

David Menefee-Libey, a professor of politics at Pomona College, likened the original political coalition that came together to back charter schools to a treaty. “You see this bipartisan embrace of a market-based approach to schooling, but both sides also had to give something up,” he said. For Democrats, that meant weakening the party’s support for teachers’ unions—a key constituency—and retreating on demands for school integration. Republicans, meanwhile, accepted charter schools as a watered-down alternative to private school vouchers.

Today, said Menefee-Libey, that treaty is in tatters, and the GOP’s original passion project is ascendent once more. “Trump-era Republicans like Betsy DeVos are more interested in weakening public education (and public-sector) institutions and principles than they are in holding this pro–charter school coalition together,” he noted.

And West Virginia’s most recent legislative session provided a demonstration of this shifting dynamic in action. Fresh off that 2019 approval of charters—and in what teachers’ organizations maintained was retaliation for an earlier (and largely successful) 2018 teachers’ strike—state lawmakers first passed an anti-strike bill for public employees. They then rushed to enact sweeping school-choice legislation to encourage faster expansion of charter schools, including online charters, neither of which have even begun operating in the state.

But the GOP’s most stunning move was to enact, without a single Democratic vote, the Hope Scholarship Program, a sweeping voucher program aimed at moving students out of what the right refers to derisively as “government schools.” Starting in 2022, West Virginia parents who withdraw their children from public schools will receive their child’s state share of public education funding—approximately $4,600 in 2021—to spend on virtually any educational cost: private school tuition, online education programs, homeschooling, tutors, even out-of-state boarding schools. Newly school-age students whose parents never intended to go the public route are also eligible for the funds, which can be banked and spent on future expenses, similar to a health savings account.

While West Virginia’s moves were the most dramatic, legislators in 18 states, including Florida, Indiana, Arizona, and New Hampshire, were close behind, creating private school–choice initiatives or expanding existing ones. Although lawmakers pointed to the pandemic’s shuttering of public schools as part of the justification, schools—both public and private—in most of these states remained open. For all of the bluster from Florida Governor Ron DeSantis and others about the importance of in-person schooling, the GOP’s favored school-choice programs increasingly bypass traditional classroom learning altogether. Instead, parents are encouraged to use publicly funded “education freedom accounts” to purchase an array of education “options,” much like television viewers who eschew cable packages for à la carte channels.

Charles Siler, a former lobbyist for the pro-privatization Goldwater Institute in Arizona, says that the GOP’s increasing hostility to public schools could ultimately harm charters as well. “The real target here is taxpayer-funded public education, and that’s a category that includes charters,” said Siler.

“What about charter schools?” quipped Supreme Court Justice Stephen Breyer in his dissent in the 2020 case known as Espinoza v. Montana Department of Revenue. In a ruling cheered by school voucher supporters, the court held that states subsidizing private education can’t deny funding to schools because they’re religious. But as Breyer pointed out, the murky territory between public and private occupied by charter schools likely means that the court’s ruling also applied to them, invalidating strict state and federal prohibitions against religious charters.

DeVos pounced, announcing that the Department of Education would begin accepting applications from religious organizations seeking federal money to open charter schools. The Biden Department of Education hasn’t indicated whether it plans to once again ban religiously affiliated charters from participating in the program. Such a prohibition would almost certainly be challenged in court as discriminatory by advocates who have a growing list of legal rulings on their side.

“It’s not a question of if, but when,” said Preston Green, an education and law professor at the University of Connecticut, who first began writing about the possibility of religious charter schools back in 2001. “For religious entities, access to public revenue is tremendously appealing, and now you have the courts basically saying to states, ‘You can’t prevent this.’”

But the specter of publicly funded schools that are explicitly religious could cause the progressive and conservative wings of the charter movement to further splinter. The “public” nature of charters has long been one of their strongest selling points, even as the schools are subject to less scrutiny than their district counterparts, and some 15 percent are operated as for-profit ventures. Now schools that can discriminate—refusing to admit gay students, for instance, or children of single mothers, on religious grounds—are a distinct possibility.

The ferocious blowback against critical race theory represents yet another threat to charter schools. Many of the bills limiting how teachers can discuss issues of race and racism, including those passed in Tennessee and Texas, also apply to charters. Federal legislation proposed by a Wisconsin lawmaker would ban the teaching of CRT in Washington, D.C., where nearly half of the city’s students attend charter schools. And one of the first high-profile anti-CRT lawsuits filed in federal court involves Democracy Prep, a high-profile charter network with 22 schools across the country. A student at a Democracy Prep charter in Las Vegas claims that he was threatened with a failing grade in a required course unless he “confessed” his “privilege.” (The case is ongoing.)

While legislators have often been hard-pressed to identify examples of CRT being taught in public elementary and secondary schools, charter schools occupy a more complicated relationship to CRT’s framework. Advocates have long made a civil rights case that charters, which typically don’t tie enrollment to neighborhood, are a necessary rejoinder to the structural racism perpetuated through the legacy of redlining. Black-centric charters, meanwhile, which infuse Black history and culture throughout the curriculum, are also increasingly popular.

“These schools were meant to meet the needs of the Black community in a way that traditional schools weren’t doing. That makes them vulnerable to attack now,” said Green.

Charter schools’ new vulnerability on the right dovetails with diminished enthusiasm on the part of moderates and progressives for the charter experiment generally. Take the federal Charter Schools Program, which helps charter school networks expand. During the Obama years, Democrats helped the program grow to its current $440 million. Now they’re seeking to cut its budget by 10 percent and ban the use of federal funds by for-profit charters, while increasing funding for public education generally. And even in blue states, where charters have enjoyed dramatic growth in urban areas, often with support from Democratic mayors, business groups, and philanthropic foundations, communities have begun to push back against further growth, warning that continued expansion threatens to undermine public school districts by siphoning off both students and the funding that accompanies them.

Carol Burris, the executive director of the Network for Public Education, an advocacy group that publishes research critical of charters, argued that DeVos’s fervent embrace of school choice is, ironically, partly to blame for the plateauing of the schools’ appeal. “Everything changed when DeVos was in charge,” said Burris. “Progressives and moderates started to see that charter schools were really a ‘gateway drug’ for the libertarian right, a means to further the destruction of public education.”

As the political coalition crumbles on all sides, charter advocates face an uncomfortable dilemma. With Democrats drifting away, they must look for new friends on the right, among some of the same lawmakers who are stoking the culture war now threatening to consume public education. A movement that has long billed itself as the civil rights cause of our time may have no choice but to ally itself with politicians who are only nominally pro-charter but are specifically pro–white supremacy. Thirty years ago, charter advocates successfully assembled the unlikeliest of political coalitions. The next one may be even more improbable.

Jennifer C. Berkshire hosts the education podcast Have You Heard. She is the author, with Jack Schneider, of A Wolf at the Schoolhouse Door.