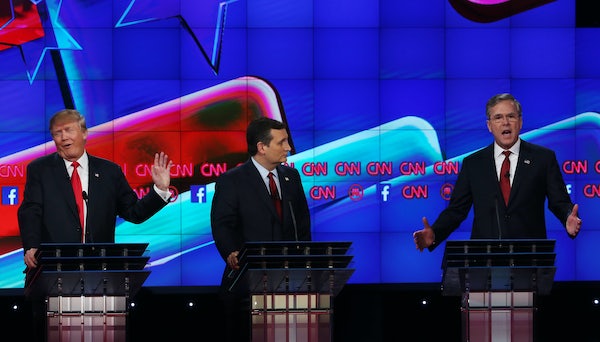 Nine presidential candidates—13 if you include the undercard debate—met in Las Vegas last night, a melee that produced its equal share of triumphs and defeats. Jeb Bush drew distinction for being the only candidate willing to go after Donald Trump—calling him a “chaos candidate,” the Heath Ledger’s Joker of the field—but his proposals were basically Trump-lite. Similarly, Rand Paul stood out for calling on all Americans not to succumb to the fear of terrorism, before being swept away on a tide of fear. Chris Christie was the angriest scolder, chastising his rivals for wasting everyone’s time with frivolous debates about policy, while invoking a California that no longer exists. Carly Fiorina had the best jewelry. John Kasich had the best complaints about not getting enough speaking time. Ben Carson showed he was totally willing to kill a lot of kids in the fight against ISIS, and overall gave the kind of signature weird performance that somehow endears him to GOP voters. Mike Huckabee had the best movie reference, if by best we mean the worst.

That leaves what the punditry has deemed the top three candidates: Marco Rubio (the establishment front-runner), Donald Trump (the actual front-runner), and Ted Cruz (the guy the GOP may have to settle for). Rubio and Cruz had some memorable exchanges, suggesting they view each other as the main competition for the throne. But no one really touched Trump, who marches on, the winner of the fifth GOP debate.