The U.S. Senate is incapable of policing itself—and the two Republicans are too shameless to resign. 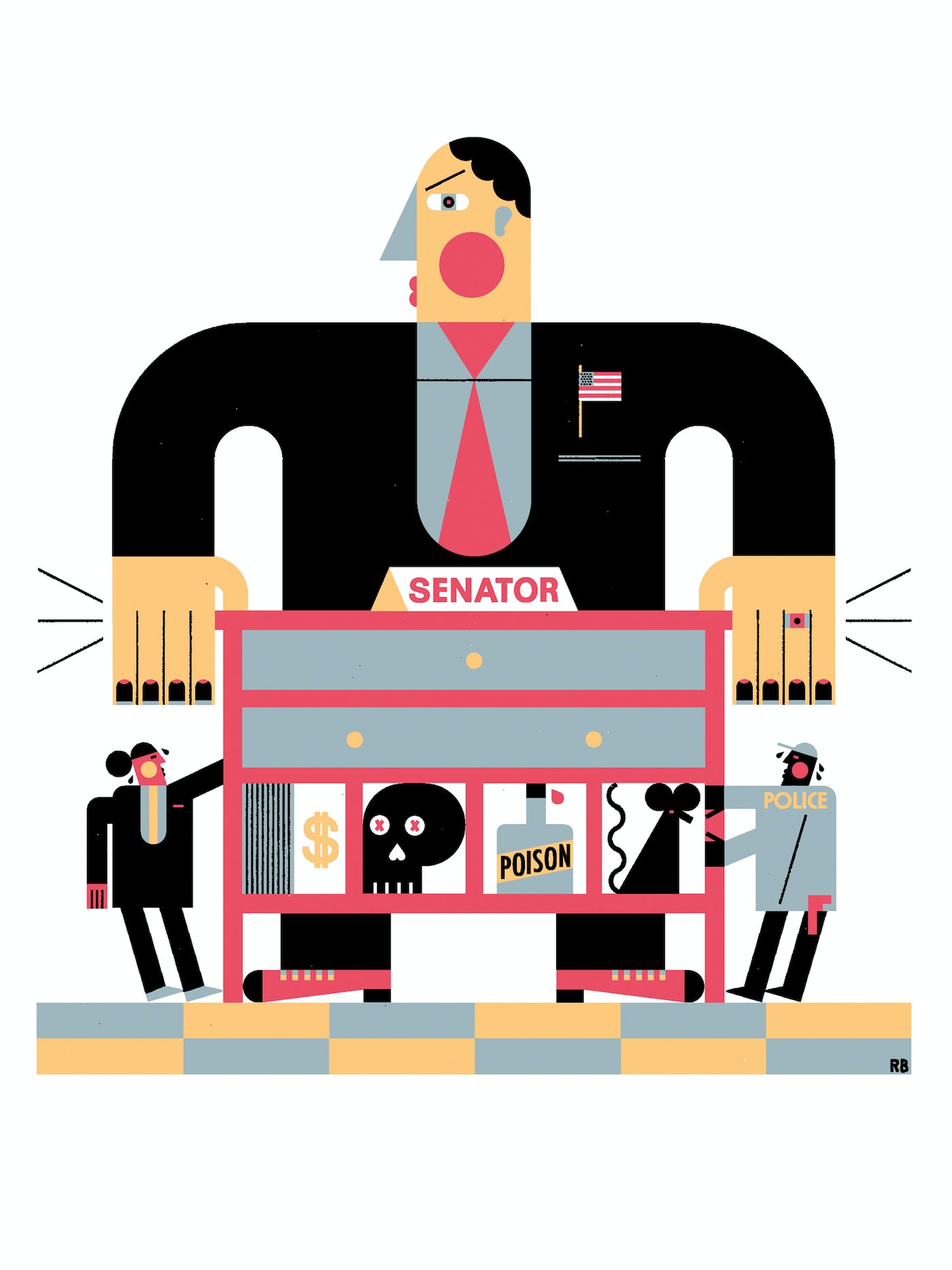 In 2009, Senator John Ensign, a Republican from Nevada, acknowledged that he had had an affair with a staffer. The authorities took notice when it came to light that Ensign’s parents had given the staffer and her husband $96,000 in what appeared to be hush money. The Justice Department would later suspend its investigation into the payments without taking action, but Ensign announced his intention not to seek reelection anyway. Then, oddly, he gave the Senate Ethics Committee a trove of damning emails and abruptly resigned before the committee could depose him. This weird story was the system working as planned, sort of: a wrongdoer cooperating with the investigation and quitting before the Senate had to get around to kicking him out.

In January of this year, seven Democratic senators filed a complaint demanding that the Ethics Committee investigate whether Senators Josh Hawley and Ted Cruz had coordinated with the groups that stormed the Capitol on January 6. Since then, the committee has given no updates on its inquiry. Don’t expect any, anytime soon. In a May interview with The New Republic, one of the Democratic senators who signed the request, Sheldon Whitehouse, explained that he is as much in the dark as the rest of us as to the status of the investigation: “Whether they have gone on to a complete investigation yet is not something that I’m entitled to be told.” Cruz, meanwhile, has dismissed the complaint as “a political tool” to intimidate him; Hawley has sent a countercomplaint urging the committee to investigate the senators who filed “an unprecedently frivolous and improper ethics complaint.” (As if to make it exceedingly clear that he feels no regret about January 6, he reiterated his claims about voter fraud in Pennsylvania.)

This seems like an obvious failure of “norms,” which, like the unwritten rules of baseball, are supposed to govern the conduct of each team and keep competition civil. Over the past decade, a new class of players has discovered that they can routinely trample on those norms without facing any real consequences. Cruz and Hawley cannot be shamed into voluntarily leaving office. But has their shamelessness broken the institution of the United States Senate, or just revealed how it operated throughout most of its history?

From the earliest days of the Senate, dating back to when it was a few dozen guys making up rules as they went along, Congress has been left to police itself. When President John Adams informed Congress in 1797 that Tennessee Senator William Blount had been plotting to hand Florida and Louisiana over to the British, the House impeached him, and the Senate expelled him. The Senate was then forced to elevate its “doorkeeper” to its first sergeant at arms, in order to coerce Blount to appear for his trial. (Blount—who remained defiantly in Tennessee—was acquitted.) Later, the Senate would expel members from the slave states. But these stories—of the Senate holding its members accountable for their misbehavior and malfeasance—are exceedingly rare. For most of its history, the Senate has turned a blind eye to the misadventures of its members. After the Civil War, the chamber became an emblem of accumulation and corruption. When Kansas Senator Samuel C. Pomeroy was accused in 1873 of bribing a state legislator to vote for him, the Committee on Privileges and Elections actually found him innocent of wrongdoing, despite all of the witnesses agreeing the payment happened. As a 2011 Congressional Research Service report put it, dryly: “What might be viewed today as blatant impropriety could have been an accepted norm or simply ignored years ago.”

This tradition of senatorial shamelessness continued well into the twentieth century. Bobby Baker, the secretary for Lyndon Johnson’s Senate majority, nicknamed “the 101st Senator” and “Little Lyndon,” amassed power (and personal wealth) by doling out campaign contributions in cash. Johnson’s elevation to the vice presidency did not set Baker on the straight and narrow; he continued to take bribes and arrange sexual encounters for powerful Washington figures through the Kennedy years.

Baker’s self-dealing became a national scandal, and the Senate’s investigation became such a farce—it was led by a senator widely seen as a nitwit, and entrusted to a committee whose main purpose, as Newsweek put it at the time, was approving Senate press passes—that Senate reformers and liberals decided the body needed a more professional committee for future such investigations. They created the Senate Select Committee on Standards and Conduct, which, in 1977, would become the permanent Select Committee on Ethics.

Like so many other features of our sclerotic political order, the Ethics Committee was the product of a peculiar, irreproducible political moment after World War II. The New York Times in 1964 referred to the ongoing Senate ethics fight as a war between “liberals” and a “Senate establishment,” in which “party lines were scarcely visible.” As a result, the reformers decided that the committee would only be truly independent and impartial if it were bipartisan. The Ethics Committee cannot complete an investigation, or release to the public any details of an investigation, without Democratic and Republican support, which, in our era, helpfully explains its lassitude. (Its official website serves up a grand total of 10 press releases, with none since December 2017.)

If the men who wrote the Constitution assumed gentleman senators could be trusted to police themselves, the attorneys and other professionals who created the current ethics regime in the 1970s assumed a clear set of guidelines ought to regulate the behavior of the modern body. It did, sort of, for a while. When senators got into ethical trouble, they often just resigned, as Bob Packwood did in 1995, or declined to seek reelection, as Robert Torricelli did in 2002. Professional norms mostly made expulsion or censure efforts moot. The committee merely had to recommend John Ensign’s expulsion; he didn’t make them force the issue.

The Ensign affair was a very long decade ago. Neither Cruz nor Hawley seem likely to be embarrassed into leaving, and Republicans on the committee are unlikely to punish colleagues for indulging conspiracies their own voters likely believe. (The committee’s Republican vice chair himself intended to dispute the election results until the riot convinced him to accept them.)

Even if attempts to hold Cruz and Hawley responsible through the toothless Senate ethics process run aground, we’re probably stuck with it. Few solutions seem promising. The Senate could create an independent body, like the Office of Congressional Ethics, which investigates the conduct of members of the House. But that body, created in 2008, only investigates, and then recommends action to the House Ethics Committee, which, like its Senate equivalent, is bipartisan by design. Law enforcement could crack down on certain kinds of misbehavior, but Congress has the power to exempt itself from things like insider trading laws, and the Supreme Court has neutered public corruption law. Reformers might try to encourage a new spirit of probity and sense of shame in Congress, as conservatives have with their approach to poverty, pushing marriage rather than giving out money. As in poverty reduction efforts, money would probably be more effective.

The Constitution grants Congress sole authority “to punish its Members for disorderly Behaviour.” But they leave it to voters to exercise that power, as the fates of Georgia’s former Senators Kelly Loeffler and David Perdue illustrate. Both had suspicious stock transactions, both bragged of being “cleared” by the Ethics Committee, and both lost their reelection campaigns. But the Constitution also insulates senators from that democratic accountability, largely by mandating lengthy terms of six years (a senator would be wise to make suspicious trades right after their election instead of just before it). If nothing else, the most foolproof Senate ethics policy would probably be not to have a Senate at all.