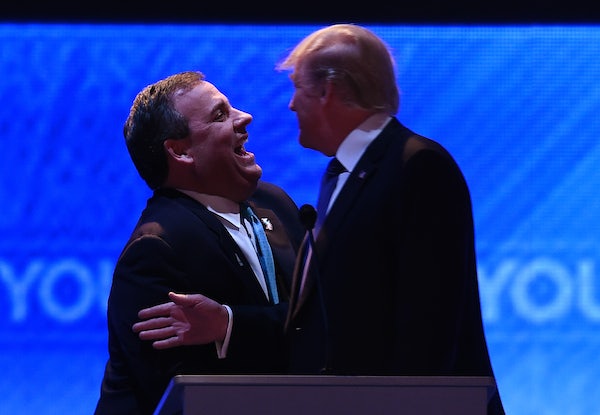 Here’s what you missed from tonight’s Republican debate.

The GOP establishment had a panic-inducing night, Brian Beutler said.

Chris Christie took back his brand from Donald Trump, wrote Elspeth Reeve. (His brand is “the jerk you root for.”)

Alex Shephard said the question wasn’t whether Ben Carson saw the Benghazi movie, but how many times he saw it.

With an anecdote about his half-sister, Ted Cruz tried to show his human side, Shephard wrote.

Nearly everyone thought bringing back waterboarding was a great idea, Gwyneth Kelly noted.

Donald Trump went on a tirade against free trade, and none of his rivals objected, Heer observed.

We didn’t get to hear Ben Carson’s thoughts about North Korea, and that’s a real shame, Shephard said.

Donald Trump is singularly concerned with people dying in the street, Kelly noted.

Chris Christie spent all week talking about how he was going to own Marco Rubio at tonight’s debate, Shephard wrote. And that’s what he did.

And Jeb Bush had his best moment of the campaign, Reeve said.